The title of this years’ Manifesta, the European Nomadic Biennial, which changes host city every time, Manifesta 12 Palermo, is The Planetary Garden. Cultivating Coexistence. That is so directly connected to my research topic, performing with plants, that I simply had to go and see it, especially when I noticed that the garden was not only understood on a metaphoric level. One of the main venues, L’Orto Botanico, is the Botanical Garden founded in 1789. And of course the city of Palermo was seducing as well. I visited the place during Christmas 1975 and have very few memories of it, being stranded there, on my way to Tunis. I was very yong, trying to get away from Christmas celebrations and landing in the midst of the very Catholic city. I remember marveling at the amount nativity displays, which I had not seen before, and the huge bundles of Poinsettia branches, the red flowers that we had in pots and called Christmas stars. I spent Christmas Eve alone in a class z pension, burning a candle and eating dried figs, that is about all I can remember. It was about time to make acquaintance with the city, so now I spent three full days there, running around in all the rundown or abandoned palazzi that served as the venues for Manifesta, and really enjoyed the city.
The curatorial concept was divided into three strands: Garden of Flows, which “explores toxicity, plant life and culture of gardening in relation to the global commons”, Out of Control Room, which sees Palermo as “the ideal stage on which to test what space is now left for individual or collective, human or non-human political agencies”, and City on Stage, with Teatro Garibaldi as a place “to come together, start conversations, explore exhibitions and participate in live events open to the public”. Well, I did not have the chance to see any live events, only videos documenting some of them, nor did I make trips to the sites in the suburbs where some collaborations had taken place. There was plenty to see within walking distance. Many works hinted at the theme of garden, by including or referring to plants in some manner. Two works, however, I would like especially to remember.
First of all the disturbing installation by Lungiswa Gqunta “Lituation – The Gardner’s Revenge”, a mixture of litter, glass bottles, petrol, papaya trees and more, a creepy replica of what many urban gardens actually look like. According the program, in the words of the artist, I suppose: “This garden is a contested landscape, one we water with liquid that will ignite the masses because the revolution is lit”. 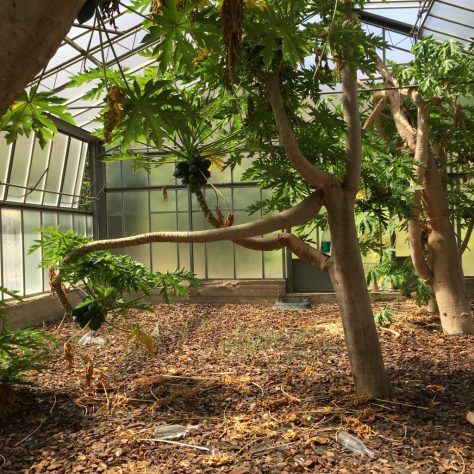 Another work that was disturbing in a different way, trying to be useful, experimenting with the idea of cultivation in collaboration with scientists and local food establishments, was called “What is Above is What is Below”, by Cooking Sections, a group founded in London 2013 consisting of Alon Schwabe and Daniel Fernández Pascual. I bumped into one part of the work in the form of citrus trees in the small Giardino Dei Gusti covered with yellow gauze, in an experiment to “water without water”. By the ruined Chiesa di S. Maria Dello Spasimo there was a related experiment with citrus trees enclosed by circular brick walls, a contemporary interpretation of the traditional mode of planting a tree in an enclosed yard. 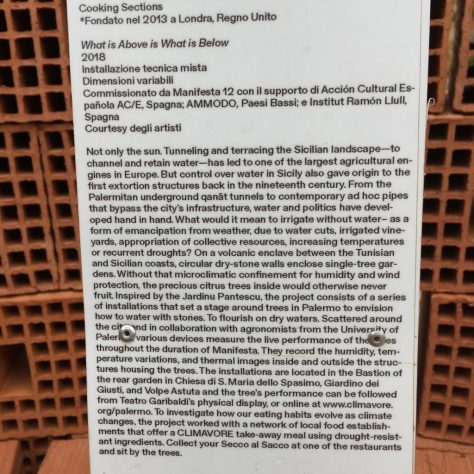 More about the program and these works can be found at the manifesta 12 website.

Masses of morels...
Lost in the crowd?
Dandelions in my scale
Catch of the day, memories of the military?