The wood behind DOCH (Dans och Cirkus högskolan, School of Dance and Circus), where I have my working place these days, is part of Norra Djurgården (The Northern Djurgården Park) but unofficially called Lill-Jansskogen.I have been walking around there, along the various paths, looking for a nice tree to sit in, preferably a pine, but have not had much success in finding a suitable one. The wood is fascinating because it is deliberately left rather feral with lots of dead trees, and the terrain is rather varied as well. After making some excursions in the area I finally decided, on the eve of the Chinese New Year, to just make up a round for myself as near as possible to my base, with some stops on the way, something easy to repeat, if not daily, at least weekly. I wanted to begin a series of images to be repeated during the year of the dog – partly because I had missed the chance to begin at the ordinary new year – and to revisit my actions during the year of the dog twelve years earlier. At that time I was sitting in a pine tree on Harakka Island, lying on the rocks as the shadow of a small pine at the shore and also visiting an old pine tree in Kalvola about 100 km north of Helsinki, hanging from its branch and leaning on its trunk, although only once a month. Some of these works are archived on the research catalogue: Year of the Dog – Sitting in a Tree, Day and Night of the Dog, while all of them are available on the pages of AV-arkki, the Distribution Centre for Finnish Media Art, like Year of the Dog – Sitting in a Tree, Day and Night of the Dog, Year of the Dog in Kalvola – Calendar or Year of the Dog in Kalvola – Calendar 1-2, Shadow of a Pine I-II and Shadow of a Pine I-IV.
Since sitting in a tree, or on a tree or with a tree is the main action I have been engaged with during the first year of my artistic research project Performing with plants, which I am now continuing with in Stockholm, that seemed like an easy choice to go on with. But of course you want to find the right partner if you are going to commit yourself to a collaboration for a whole year. And nothing seemed really inviting or seducing or inspiring in any way. To simply get started I decided to make a try-out, and to begin with the stub of a recently felled old spruce, which had caught my eye during my walks, to sit on the stub as my first stop, and to continue from there. Moreover, I thought I would perhaps make do with some of the small pines on the hill right next to the building, since they were growing conveniently right there. So, the day before new moon I took my camera and chose these four stops.

Sitting with the tragic corpse of the spruce: 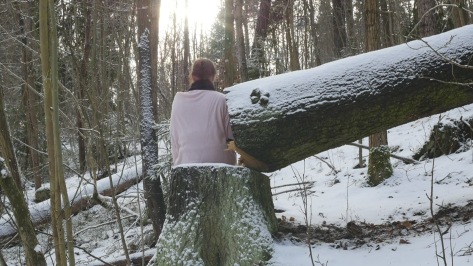 Resting in the corner of the fairy tale forest:

Swinging on the branch of an old pine on the hill: 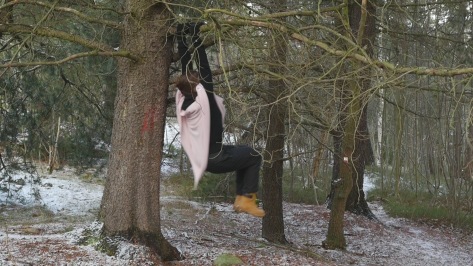 And finally, sitting in, on, with or amongst a small pine by the path:

These four actions and four images, two with spruces and two with pines, are all very different in atmosphere, but I was rather happy with making these choices without further ado. This was a beginning, despite small technical problems, like the attachment part of my microphone being broken, or my memory card not finding the video files and so on. In the evening, in a professional photography shop, they managed to repair the microphone stand and to explain why my card reader did not find the files: I had accidentally recorded them in the wrong format. So, to celebrate the start of the Chinese new year, I decided to change the format I have been recording in to MP4, following the advice I received. This was after all only the first test.
The following sessions I will document on my Stockholm-blog, here. Still images and links will in any case be available on this page of the project site.