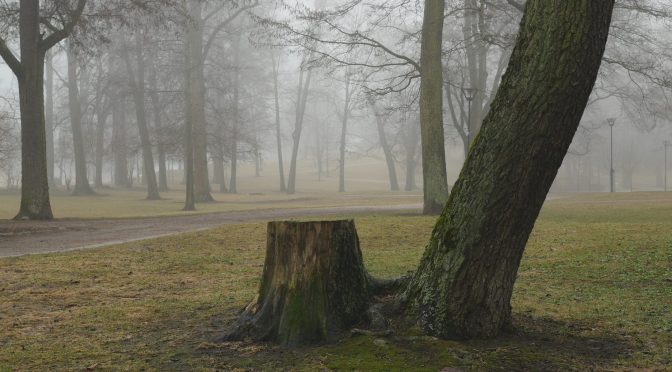 On Friday morning a thick white fog covered the sea and there was no way of distinguishing the horizon when adjusting the image in Kaivopuisto Park. During the Easter holiday week, while I was away, the marks on the ground for the tripod had disappeared, but somehow I managed to frame almost the same image. And now I know for sure that the tree up on the hill that I am sitting with is not a willow; no catkins in sight. Behind the other tree, the alder down in the park, the grass was already green, or rather the small plants on the ground had small green leaves.


On Saturday the weather had cleared somewhat, but the dark clouds looked ominous; later in the day there was a veritable hailstorm. The parasols of the Mattolaituri terrace café were in place, waiting for the season to start, folded like some giant white umbrellas.


On Sunday the day began with a snowfall, although the snow melted immediately when it hit the damp ground. I waited until the rain had subsided and walked out to the park at midday. The geese and their shit is now everywhere, a sure sign of spring.


Sunday is also the last day of the exhibition Atmorelational at Gallery Forum Box, where my video work The Tide in Kan Tiang is shown in the Mediaboxi program. The work was performed already at the end of 2015, and is clearly a forerunner to the project performing with plants, although it uses the same rough time-lapse technique that I have used in the series Animal Years. But with no scarf! I am literally performing together with a small tree, which grows in a rocky cove near Kan Tiang Beach on Koh Lanta in Thailand, standing next to it every two hours for the duration of a day. When I started in the morning I assumed the tide would rise higher than it did, based on the marks on the shore and did nor realise that the moment of high tide was rather early in the day. I wrote a blog post at the time as well. The work has nevertheless been well received and, believe it or not, sold into a private collection, which is quite exceptional for a video work. I am planning to write something about the work, but I can only write my thoughts about doing it; what other people see in it I have no access to.

In a bar, unbelievable!
Celebrating (personal) solar return…
Something familiar…
The fragrance of hyacinth…