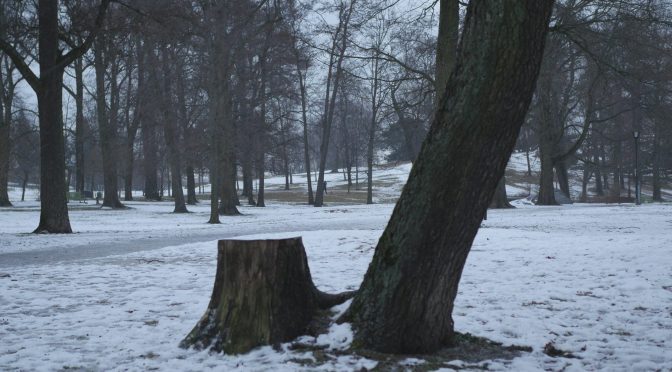 This morning I had planned to remake the image with the tree in Kaivopuisto Park and to adjust the position of the tripod somewhat. I dressed in warm clothes and at ten o’clock, when it was sufficiently light, or at least as light as it would get with the cloud cover, I headed out. There was not too much of a snowfall, but once outside I realised the wind was rather strong. When walking down to the shore I changed my mind and thought I might visit the tree I saw on the way back from the park last time, instead. The old alder with one trunk cut off was such a sad sight, but it was situated further away from the sea, and was at least partly protected from the wind. I placed the tripod quite far towards the street in such a way that the light pole was hidden behind the remaining trunk, removed my coat and cap, put on my pale pink scarf and sat down on the stump. The park was empty and peaceful due to the harsh weather and the relatively early hour, but of course the dogs were out. A small dachshund with a red dress came by and started barking at me, at this strange creature sitting exactly where the dog would have liked to pee, probably.

Sitting on the stump felt almost like sitting on a bench, and the image is fine or ok at least, so this might very well be a tree worth visiting regularly.