Finding an empty horizon is not so easy, not even in coastal cities like Venice. I started playing with the horizon because of a small green line in my new camera. It is indicating when the horizon is in balance and dividing the image nicely in two equal halves. After playing with the idea of images cut in half by the horizon I encountered the famous Seascapes, the minimalist black and white photographs by the Japanese master Hiroshi Sugimoto. Although a video image brings in the temporal dimension, and adds color and movement, the still images look almost the same so I soon realized whatever I did would be “After Sugimoto”.

After a few attempts in Helsinki my first image in Bilbao was blue on blue as planned, but there some dirt on the lens destroyed my attempt. In Helsinki the weather was bad and the raindrops were blurring the image. Another day the sea was rough, spraying the image again; it seemed almost impossible to get a “clean” video clip. The simpler the image, the more all kinds of imperfections stand out. In automatic still images the camera seems to be able to clean the spots, but not with a video. Thus I carefully cleaned my camera, and decided to start again, and then once again.

Venice should be no problem, I thought, once one gets a little further out of the historical city. I looked at the map, and realized Lido di Venezia would probably be my best bet. I have been there before, for the first time in 1996, when I tried to write the radio play Via Marco Polo (living in a pension on via Marco Polo). So I headed out there after a nice lunch with colleagues on Murano. We were visiting the place with the glass factories as an antidote to the overload of contemporary art we had experienced during the opening week of the Venice Biennale. The sky was turning dark in the afternoon when I took a vaporetto first to San Marco and then another one to Lido.

On Lido I walked straight across the island, heading for the beach, in opposite direction to the crowd returning from there, and already felt the first rain drops on my skin. As soon as I had found my way to the shore and placed my tripod in the sand the rain started. I managed to frame the image properly with the help of the zoom and stood there in the rain, clutching the tripod in the wind, recording a sequence of three minutes. When finishing I realized the camera had slowly moved downwards, the horizon was no longer exactly in the middle. I considered for a moment whether I should try to find shelter and wait for the rain to pass, but decided I could perhaps return the next day. Only in the vaporetto on the way back, looking at my “catch” did I realize the water spots on the lens in the video recording, and almost wanted to cry. The spots felt like some weird form of curse. Should I perhaps make these annoying disturbances part of the project? The biggest spot is clearly visible in the still photo taken with manual focus. 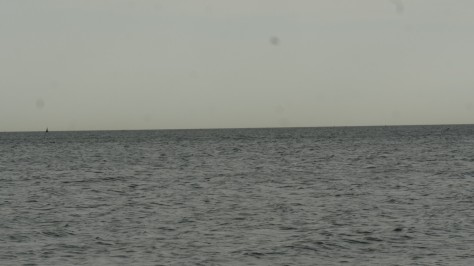 The next day I made a new attempt, returned to the same “free beach”, walked out on the rocky pier where people were sunbathing and placed my tripod at the edge. Everything was fine, although a woman nearby was speaking on the phone, which irritated me at first, but then I realized that might make quite a fascinating soundscape. 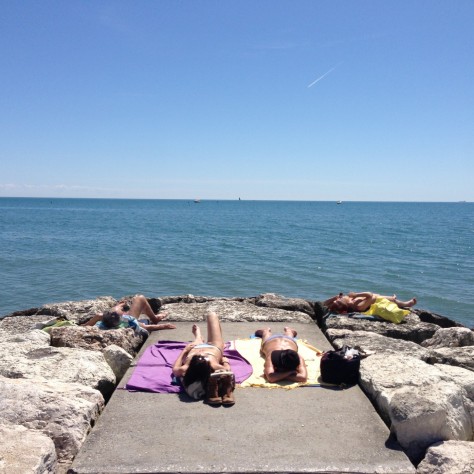 The sun was shining, life was smiling and the ice cream I picked up on the way back tasted delicious until I saw the results: the same spot was still there. Now all I can do is take the camera to be cleaned by a professional and hope for another chance to visit these shores. The idea of abstract minimalism is turned upside down on video, at least in my hands, so it seems.