One of the main attractions in the Helvetinjörvi National Park in central Finland is the narrow gorge called Helvetinkolu (Hell’s cleft) that leads down to the lake. More about the park and the famous cleft here. Hiking in the area with a friend during the weekend and enjoying the various forest types and many small lakes next to each other was not meant as a working trip, although I did bring my camera. And the small stone with the red arrow, of course. 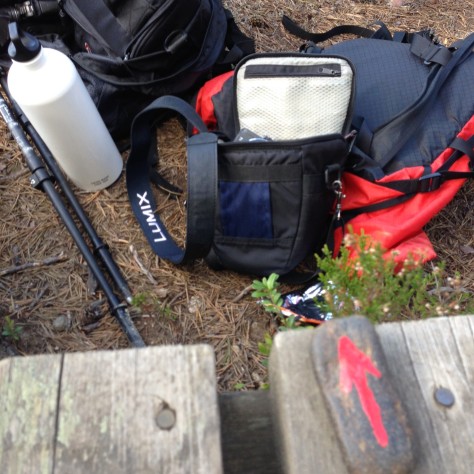 Seeing the steep slopes immediately reminded me of a project I tentatively started last autumn in Oulanka National Park in the North East (see the blog post “Little Bear’s Trail”), something that could be called the vertical landscape. In order to capture something of that vertical feeling I turned my video camera on its side, and why not? Already Bruce Naumann played with turning monitors upside down. It was only when I tried to show some of the vertical video clips at a screening event that I realized the problem; I could not change the position of the projector for my clip only. Obviously these experiments were stuff for installations only, and partly because of that I did not pursue them any further. Only when I saw this landscape did I change my mind again. Even though there were no rivers or rapids rushing through the gorges here, the shores of the lake were steep. And the cleft Helvetinkolu is vertical for sure.

It looks a little like a gateway, and since the lake is narrow, deep and the water is dark, one could imagine that it leads to the underworld. Sitting in the gorge, which is quite impressive by Finnish standards, since there are no really high mountains in the country, and listening to the wind howling above, I could easily imagine some evil spirit appearing to chase away disturbing visitors like me.