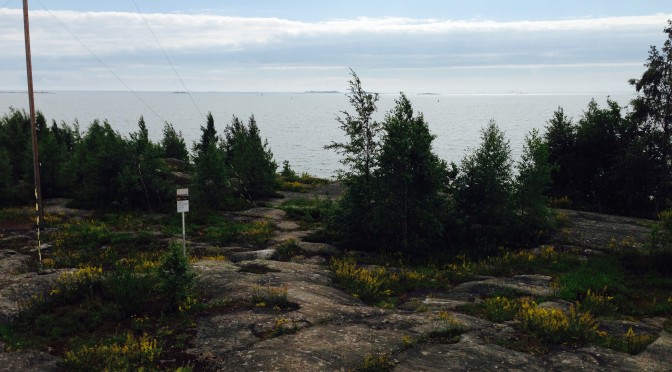 Revisiting the same rock on Harakka Island in Helsinki, which I used to visit weekly in 2002 and which I now visit once a month as a kind of re-enactment of that previous year of the horse, feels like a relaxed return home after a trip to Shanghai in China. During the conference Performance Studies International 20 at the Shanghai Theatre Academy I actually showed a quickly edited version of the first part of these re-visits together with the original work in a small performance-presentation called “Revisiting the Year of the Horse”. Besides the original video Year of the Horse (12 min) from 2003 I also showed the work Sitting on a Rock (Rock with Text) (6 min.) which I made the following spring at Easter time in the same place. Moreover, I presented a work performed recently in Koivumäki after midsummer Sitting on a Rock in Rain, which I have described in the Finnish version of this blog and which I edited specifically to be presented in Shanghai. The occasion was an event organised by the artistic research working group Porous Studio Avant-Gardening.

Sitting on the same rock again, knowing that the second half of the year is still in front of me, feels both strange and familiar at the same time, like engaging with the remains of some ancient practice that does not really belong to me or my concerns at the moment any more. On the other hand I have not invented any significantly different approaches to performing landscape, not yet. In Shanghai not only the landscape and the environment are different, the temperature, humidity and consistency of the air is perhaps the most striking difference. The whitish fog in the hot and humid monsoon-time city is very different from the cool breeze on this semi-sunny afternoon here by the sea. In general a certain amount of warm humidity feels nice to breathe and soothes your skin. When it is combined with heavy pollution, the effect is not so nice, though. In Shanghai they seem to understand that oxygen must be produced, since they have planted lots of trees everywhere. And for the first time I really sensed how my body automatically started to navigate closer to trees and bushes in order to find more air to breathe.

In fact I did not sit on a rock during my performance in Shanghai, nor did I try to find a rock to sit on in the nearby parks or on campus. Although I carried my video camera with me, and unlike the sessions of the Porous Studio at previous conferences, I did not document anything on video or create any new work. I took a lot of snapshots with my phone, of course, but that was part of my duties as a tourist. Some of the rocks in the famous Yuan Gardens, which I visited already on the first day, would well be worth sitting on, although the classical Chinese garden is packed with people most of the time. While visiting a huge new recreational park in Chanzhou, a nearby city where we were taken for a “retreat” after the conference, I realised that the idea of combining natural and artificial elements and creating mixtures of nature-culture has been part of the Chinese civilisation from very early on. It is only the enormous scale that makes it scary.

For the presentation I tried to write a new version of the text “Sitting on a Rock”, without much success. I am not happy with the version I presented, so I will not reproduce it here, but only the informative text I began my presentation with:

The popularity of various forms of re-makes, reconstructions, re-enactments etc. has been discussed in recent years, for instance in the anthology Perform, Repeat, Record Live Art in History, by Amelia Jones and Adrian Heathfield (2012). And the fascination with all these repetitions (with variations) of classical performance art pieces could certainly be discussed in terms of the avant-garde (one of the themes of the conference) as a historical phenomenon, the radical gestures of which we can only repeat and rehearse with a historical interest for want of any real innovation or critical force in the current situation today. But what about revisiting your own work? Is that not the ultimate evidence of total stagnation, even stultification of what might have remained of a critical impulse?

In the year 2002 I decided to document changes in the landscape by visiting the same place on Harakka Island in Helsinki approximately once a week for an entire year. It was a development of a work called Wind Rail, where I visited the same place once or twice a day for two weeks to show the changes caused by changes in the weather. In that work I had placed myself in two different positions in the image space, first at the side in the foreground, like the marginal shepherd figure in classic landscapes, who is supposed to guide the viewer’s gaze into the landscape, and then further in the image more centrally, as a smaller figure embedded in the landscape. In both cases the human figure dominates the image. This dichotomy I wanted to exaggerate further and thus placed myself in front of the camera first in such a way that my shoulder covered half of the view, literally preventing the viewer from seeing the landscape. And secondly, as you will see soon in part two, I placed myself deeper in the landscape as a tiny figure sitting on a rock. My idea was to create a two-channel installation with part one, the shoulder, on the left, and part two, the figure on the rock to the right. Due to automatic light balance the colour and brightness of the images did not combine well; they change between the first part with the scarf covering half of the image and the second part with the view of the landscape and me sitting on the rock to such an extent, that presenting them next to each other as a two-channel installation was difficult. So the work turned into a single channel video, in two parts, one after the other.

To call the work Year of the Horse was almost a coincidence. While documenting a day and a night on the same rock the following spring, I realized it was the year of the goat. The size of the rock somehow worked with the size of a goat, and I liked the idea of years having names. Only much later did I learn more about the Chinese calendar and its twelve animals, and decided to try to document a full twelve-year cycle. Although I had started it in the middle, in the south, as it were, in the year of the horse, rather than in the year of the rat, in the north, as is traditionally done. I completed the cycle of years in the year of the snake in 2013 (actually January 2014, since the Chinese new year falls on the first new moon after the winter solstice). To accentuate the idea of cyclic return I decided to revisit the same site this year, in 2014, since we are living in the year of the horse again. But this time only once a month, to form a calendar of sorts.

Now, in the year of the horse 2014, I sit once a month on the same rock, with the same scarf, but with a new camera (HD) and new image proportions (16:9 instead of 4:3). The year is obviously not finished yet, so what you see is February, March, April, May and June, only. What you see is the “remake”, revisiting the same site. The small windmill is the only visible difference in the environment. I seem to repeat the original technical problems, too, however, because I still use only automatic camera functions. At least time is speeded up in this monthly version…