One could assume that the ancient Celtic idea of a tree is rather strange, at least if you look at the so-called tree calendar. The vine in September, the Ivy in October and the reed in November are not what first comes to mind when thinking of trees. The real problem with the vine and the ivy is the same as with the holly, they do not grow as high up north as Helsinki. Some singular examples can be found, and since the ivy is a rather common feature in outdoor flower arrangements I expected to find some ivy climbing along a wall or around a tree somewhere, but no. At the Kaisaniemi Botanical garden I found an ivy growing near the entrance, as a low shrub barely succeeding in climbing up the wall, nothing to perform with, really. And I was already a few days late in the calendar. The month of the ivy extends from 30 September to 27 October at least according the version of the calendar that I have followed during this year. So yesterday, on the first November I decided to quit searching and went and bought myself a new house plant, an ivy in a pot. I would have preferred a larger one, but this was as big as they had them at Stockmann, and that would have to do.
The next problem was where to place it, or myself together with it, where could I find some form of neutral background? The wall in my home are covered with bookshelves or furniture; my study at the Collegium did not have enough light; to take the boat to my studio on Harakka seemed cumbersome and if I bought a house plant I should perform with it at home, I thought. The cupboard doors in my bedroom are white, and by moving away some large plants from the window I could get almost enough light for the video camera, which was sitting on a tripod in the middle of the room. The first attempts in the morning where oddly unsharp, probably due to lack of light, or then some mistake, so I tried again in the afternoon. This time I placed the tripod on my bed and moved two strong lamps from the kitchen and the living room to assist the cloudy daylight from the window. I also went through the automatic functions of the camera, and yes, now the image was at least sharp. Because the tripod was on the bed the horizon was not exactly horizontal, however, which would not have mattered if not for the vertical line of the cupboard door, which was clearly leaning. How easy it is to work in harsh circumstances outdoors, where you accept what is and that’s it. Indoors, when everything has to be arranged the whole thing is immediately much more challenging. But perhaps some small miracles could be done while editing. Usually I am not using any after effects and my main tool is a dissolve. But to brighten the image a little and add some contrast I could try. It helped a little, but not that much, as you can see below. 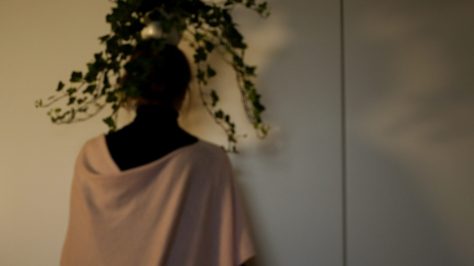 I also remembered straightening the horizon in one clip once, but could not remember how to do it any longer. I searched through all kinds of weird effects until I resorted to google, and immediately found a detailed reply to somebody’s desperate plea, and managed to sort it out with that advice. The difference is clear. Thus, not only did I change the rules by missing the proper time of the month, October, using a houseplant and performing indoors, I even used editing tools to correct the image, well, well. One can only wonder where I will end if I continue down this road… 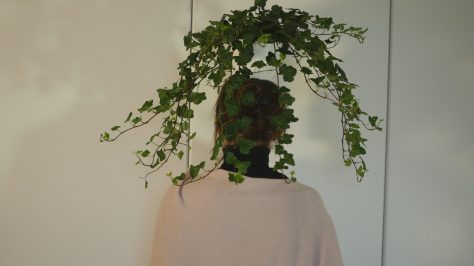 The first version is murky and rather unpleasant to watch, although the composition and the fold of the scarf looks much nicer than in the second image, which is fairly sharp and “normal”. Both versions are available on the Research Catalogue, as small files, here. The interesting thing in the second version is the constant movement of the plant, due to my shivering. I remember it was painful to balance the pot, I had some strange cramp in my neck, but I could not imagine that I would be shaking that much. It looks funny, because it is as if the ivy would be shivering, trying to tell me to rest it on a more stable surface. After this ordeal it found safe place on top of a chest of drawers with some light, too.