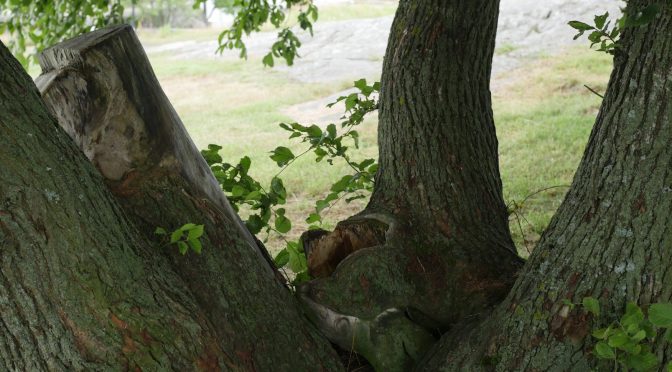 Now that the grass around the elm tree is cut the stubs of the two trunks that accompany the three growing ones are more visible. One of them is completely hollow, and was perhaps cut down because it was rotting from the inside, while the other is cut rather high and looks like it was a quite healthy when cut off. Anyway, they all grow from the same root, so when I say I am sitting in the elm tree I am actually not describing the situation clearly. I am sitting under the elm trees or at the foot of the elm trees or, well? – Most of the time these (holi)days I am actually sitting in the former telegraph on Harakka Island, as a gallery guard of sorts.

Spending time as a gallery guard is a nice form of holiday activity, especially when the gallery or exhibition space is a small wooden house built at the end of the 19th century to serve as a telegraph for the Russian military, and situated on an island with nature preservation areas. And of course it helps if the exhibition you are taking care of is your own. Well, Harakka Island is very close to the centre of Helsinki and I have my studio there in the former Chemical Research Laboratory of the Armed Forces, together with quite a few other artists, so this is actually a working place for me. In summertime, however, the place feels almost like a summer cottage. Perhaps moving down the slope from the big main building to the little wooden house creates the feeling of cottage life. So here I sit and drink tea and chat with the occasional visitors, who are not very many I must confess.

The exhibition is called Cami de Cavalls and shows two works recorded on the horse path with that name on Menorca in July 2015, as well as a small work recorded in Stockholm in 2016, Summer at Söder. For more information about the exhibition, please look at Cami de Cavalls. And because the exhibition is open on from noon to 5 pm, I have plenty of time to visit the trees in the Kaivopuisto Park in the mornings.