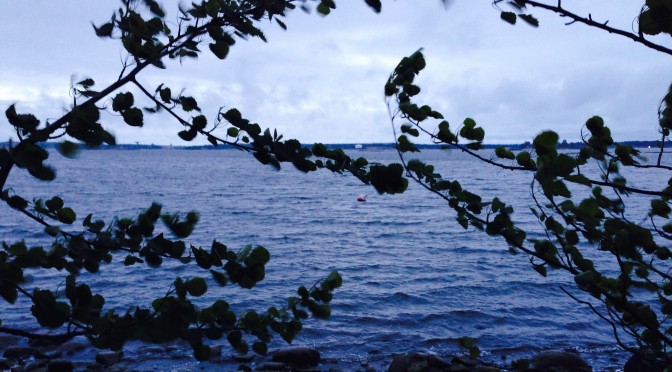 This dawn began with a storm. Perhaps 8 m/s is not considered a storm officially, but when it blows from northeast it feels brisk enough. And the aspen, famous for shivering in the slightest breeze, are no longer trembling but shaking. Today is the penultimate morning I am going to record, and I had of course hoped for some interesting cloud formations combined with coloured skies, but no, the sun was hidden by a uniform grey cloud cover at sunrise 4.12. or 4.14.

Yesterday I edited the previous mornings into a test version, 22 minutes, with one minute for each morning, and decided to continue with today and tomorrow and add them at the end for a final version only tomorrow morning. And in case something would not work I would in any case have this test version to show. All in all there will be 24 mornings of 30 on tape. In the beginning, after a few sessions, there is a small jump in the framing, in consequence of the camera tripod falling in the storm while I was away in Stockholm. The wind today has nothing close to that kind of force. The rest of the images are then fairly similar, so the changes move smoothly.

The choice of clip duration, 60 seconds, is arbitrary, although I remember from before that a rhythm created by 30 second clips is fairly slow, so with 60 seconds you probably will hardly notice a rhythm at all. There is enough time for becoming aware of some small events within the clips, like birds flying by or a boat passing; the increasing light is not visible to the eye, though. If the average duration of a shot in a mainstream movie is 2 seconds, these images are slow indeed.

Slow film is a phenomenon related to ecocinema, I hear. Actually I read about it in an essay written by a student, and immediately ordered the book in question, an anthology called Ecocinema – Theory and Practice, edited by Stephen Rust, Salma Monani and Sean Cubitt (Routledge 2013). Film studies is a field I am not at all familiar with, but this seemed like something interesting. And the idea that one needs to use long shots and to slow down the frequency of image changes in order to be able to see what is going on in the environment makes sense. But of course there is a risk of slowing down too much, so the viewer gets bored and stops watching altogether. In an exhibition situation one can play with the balance between an image which seems static, so the changes come as a surprise, and a rhythmic change, which is spellbinding as such.

In the test version some of the clip changes were so smooth that it was hard to notice whether the image actually changed or not, and that was my ideal to begin with. The effect of the smooth changes is rather peculiar, though, because it creates and illusion of a continuous morning, which is not the point. I decided to call the work Before Sunrise (Mornings in May) because without knowing that all clips are taken before sunrise one could imagine some of the grey ones depicting the afternoon. I refrained from giving it a poetic or conceptual title that could provide some kind of specific meaning and preferred to leave it open to meaninglessness.