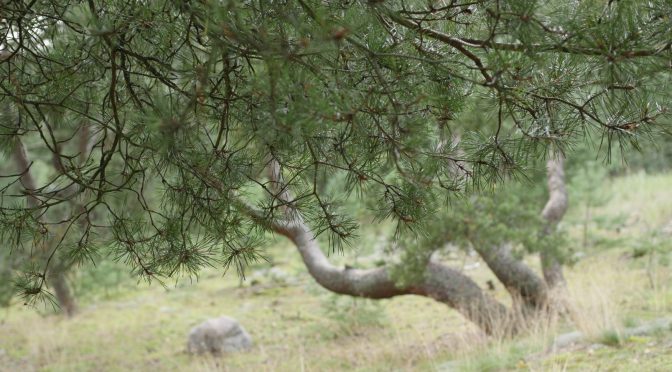 After a few days of walking back and forth on the sandy forest paths on the pine-covered dunes of Nida I have realized that in contrast to the usual proverb, I cannot see the trees for the forest. Today I found a pine growing on the slopes toward the sea that I could somehow make myself sit in, (see image below) and another one bent so low in the forest north of the main road that it could be quite comfortable to sit on. (See image above) Something in the environment suggest moving on the paths rather than sitting in one place, so I played with my little Gopro action camera and tried to see what could be done with it. At first I walked with the camera in my hand and tried to record the shifting quality of the ground while walking. That did not look interesting and the movement was rather disturbing actually. I tried my head-gear instead, a strap to hold the camera like a head lamp. After a few attempts I found an angle that resembled normal eyesight, although walking made the movement slightly bumpy and thus confusing. Am I so accustomed to smoothly gliding cameras in Hollywood movies that everything else makes me dizzy? When I looked at the material it was enjoyable when speeded up ten times, a sports documentary quality artificially created. An action camera is fun, yes, but if you are not engaged in very energetic action, then what to do with it? And how can you perform with or for a moving camera. The whole idea of using a camera on tripod has been to be able to step in front of the camera, too. But how to do that with movement? A camera on tripod is necessarily static. If I attach the camera on my moving body the resulting image is necessarily unstable and bewildering. My initial idea was to combine the two, to walk on the path with an action camera while my old camera would record the walk from a distance. Perhaps I will, try that out tomorrow…. hm.

Today I walked with my action camera again, up and down two of the paths, but was not very impressed by the result. Perhaps I should combine all these walks on one screen, as small squares inserted into one image? The forest is full of pine trees, all fairly straight and tall, or then small mountain pines that form impenetrable thickets. Finding a suitable partner is not an easy matter, so I decided to return to the pine with the branches bending low that I saw yesterday and to try to make a session with it. In the afternoon I changed to my black “performance outfit”, took my camera, tripod and scarf, and set out to find the pine. The pine was near to the path, so finding it was no problem. Finding an interesting viewpoint or camera angle was more difficult. I wanted to avoid possible passers-by on the path and to find a reasonably stable point for the tripod. In the end I found two ways of framing the image that were somehow interesting. The first one with the pine branches in close up covering the whole upper part of the image and the second one with the sculptural shape of the branches crossing each other. I sat for approximately ten minutes for each image and was rather lucky in having that part of the forest for myself for a while. 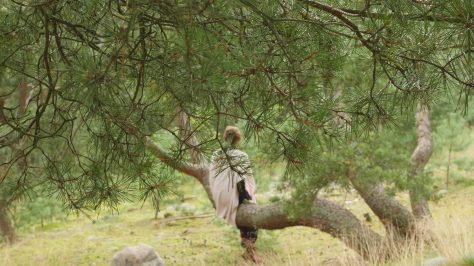 When I looked at the material and edited the short videos, I found the second one less interesting, although the branches cross each other in a peculiar way; perhaps because my face is visible, when I am sitting in profile. The first one is quite beautiful actually, because the camera focuses on the pine needles in the foreground and the human figure in the background remains soft and unfocused, a vague shape. The image is very romantic in some way, but at least a little different from my other sittings in trees. So now I have something to show for my first week in Nida! I will continue playing with the action camera, however, because I want to try something different. These small videos I called “Resting with a Pine” and that is exactly what they are about. But what about the action?

In a bar, unbelievable!
Celebrating (personal) solar return…
Something familiar…
The fragrance of hyacinth…