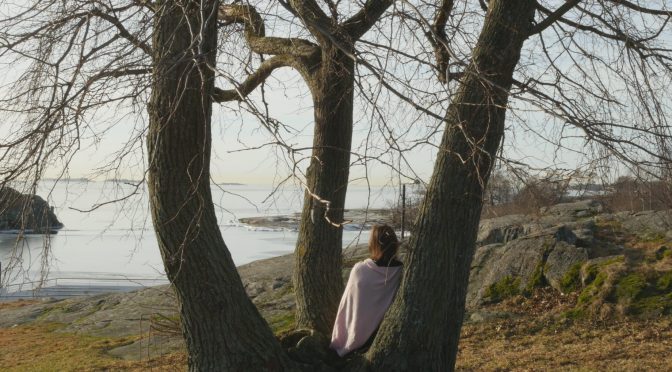 Visiting my tree partners in Kaivopuisto on Wednesday morning was a delight. The sun was shining from a bright sky and felt actually warm; there was absolutely no wind, so sitting on the tree trunk looking at the icecovered sea was pure pleasure. The sun was so strong I almost had to close my eyes.

On thursday morning, what a shift in atmospere! The temperature was almost the same, but no sun and some wind made for a cold and grey day. I changed the order of the images and began with the alder stub inside the park, before walking up to the hill and the view over Uuninsuu strait, which was now partly open. My plan was to continue to the island across the ice after visiting the trees. It looked scary, but I decided to go down and take a closer look. Perhaps I could phone Osmo who planned to go across today, to have some company, or ask whether he already made it. When I walked down I saw tree people walking across the ice and tried to hurry to catch up with them, but by the time I was on the shore next to the small piece of wood placed across the rocks at the beginning of the ice, they were already almost on the other side. I tried to shout and ask where they had walked, but gave up before even trying when I realized that although I might be able to cross to the island after them now, I would have to come back alone. I would not want to to stay all day there working, as they probably would do. In short, I behaved like an old sissy and turned back.

Friday morning, the weather was wet and misty. And there was plenty of water on the ice here and there; I did not even consider crossing to the island this time. By the time I was up on the hill the mist had cleared somewhat and there was no rain, although the branches had drops. When returning to the alder across the hill the ice was so slippery with water that I sat down and tried to slide down the slope, with my big plastic bag containing the camera and the tripod sliding down next to me.

There were again bird watchers around the nearby shrubs and this time I got to know what all those people with their huge camera objectives and binoculars were interested in. A passer-by with a small border collie asked me whether the Black-throated Trush was still around, because he assumed that was what I had used my camera for. Seeing my bewilderment he explained that it is a small bird usually nesting in the Ural Mountains that had been sighted there at the birds’ feeding place. At home I looked it up, and there was indeed an image of the bird taken in that very park the day before, see here.