In springtime water is everywhere in the mountains. All the snow has to go somewhere, so it runs, flows, falls in trickles and cascades down the slopes in various forms of brooks and rivulets. In Kilpisjärvi I was experimenting with recording them, focusing on the small ones. I recorded the sound and took some snapshots of all the murmuring creeks I crossed on my path. When I looked at the snapshots on my comptuer I was disappointed at first; the grey sky was reflected in the water and produced strangely bland and flat pictures. After seeing many variations i realized that these snapshots are actually more fascinating than the recordings. I posted some on the ArsBioarctica blog as well:

Recording the small mountainbrooks in Kilpisjärvi reminded me of the very first video work I did on my own in 1999 in Centre D’Arte i Natura in Farrera de Pallars in the Catalonian Pyrenées. There I followed two small mountain brooks to the point of their confluence, and combined the material with some fragments from an essay on exactitude by Italo Calvino, some images of me walking down the slopes and some medieval music. The four channel installation was formed into a table and you could listen to the sounds with headphones.


For the exhibition Calvinomemos in Kontti gallery in Kiasma 2000 (curated by Irmeli Kokko) I wrote a text, which I copy here in in its original form:

Where the sea begins

In writing about exactitude Italo Calvino mentions two symbols that are used to describe the process of formation of living beings, the flame and the crystal. “Crystal and flame: two forms of perfect beauty that we cannot tear our eyes away from, two modes of growth in time, of expenditure of the matter surrounding them, two moral symbols, two absolutes, two categories for classifying facts and ideas, styles and feelings.” (Calvino 1993, p 71) Though Calvino speaks about literature, those two images or ideals are relevant even for one who makes performances; “in a live performance these two forms of existence are united a performance is both a composition and an event (communicative field) even if the emphasis between them can shift and the creation process can follow either path.” (Arlander 1998, p 155)

When I started to plan this work in autumn 1999, those two images evoked different questions. Could water perhaps be a third? I had worked with water sounds as material for a radio play and noticed, that it was an interesting starting point to think of water as a metaphoric solvent, where both factual and fictional destinies and stories melt and mix and which reflects them in a distorted form. Water could also be related to radio as a medium, or the media flow more generally formless, sipping in everywhere, melting everything together to sameness. Nevertheless I was fascinated by the idea of Joseph Brodsky that water is the image of time. “Should the world be designated a genre, its main stylistic device would no doubt be water.” (Brodsky 1992, s 124) According to him a thought itself possesses a water pattern, as one’s emotions and even one’s handwriting.

Could water, like the crystal and the flame, be a form of `perfect beauty that we cannot tear our eyes away from’? And Gould we perhaps continue with the analogy? What is water’s mode of growth in time? To flow, to unite with other waters, to “return to the sea”. And what is its expenditure of the matter surrounding it? To erode, to carry along, to solve into oneself or to reflect. But water not only consumes, it also nourishes. As a symbol as well as in practice water is necessary for life, `the water of life’, which purifies, refreshes and heals. When it is polluted, it feels almost as deeply terrifying as if the earth would tremble or the sky fall down. And in what way is water be a moral symbol, an absolute? Lao Tzu says: “Highest good is like water. Because water excels in benefiting the myriad creatures without contending with them and settles where none would like to be, it comes close to the way.” (Lao Tzu 1963, s 64) And: “In the world there is nothing more submissive and weak than water. Yet for attacking that which is hard and strong nothing can surpass it. This is because there is nothing that can take its place.” (Lao Tzu 1963, s 140) Calvino speaks of a “Party of the Crystal” and a “Party of the Flame” in twentieth century literature. What would the poets of a “Party of Water” be like? How Gould water be used as a category for classifying facts and ideas, styles and feelings? The continuous, endless flow of water can be associated at least with the stream of consciousness, with everything that flows, like for instance text. In Chinese mythology water represents communication, in Western astrology it stands for emotion. For me the most beautiful thing with water is how it adapts to the environment, flows with its surroundings but always retains its uniqueness; evaporates, condenses to drops, freezes, melts and flows again, but remains always irrevocably and inexorably what it is water.

In September 1999 when I went to Centre D’Art i Natura in the village Farrera in the Pyrenees to explore what a mountains landscape sounds like, I was a little scared at the thought of staying for a whole month so far from the sea. Once there I immediately realized, that the blue mountains on the horizon were excellent surrogates, like waves turned to stone. The strongest audible element of the landscape was the murmur of mountain brooks, which I at once fell in love with. While climbing up the slopes following the routes formed by the brooks 1 also understood that here `the sea begins’.

I video filmed the two branches of a small brook, Barranc de Farrera, until the point where they unite below the village. From there the brook continues towards the village of Glorieta, where it joins another brook, Barranc de Burg, and at the bottom of the valley the river Noguera Pallaresa, which flows as a bigger stream toward the plains, the river Segre, Ebro and the Mediterranean. I filmed the journey of the brooks very simply; close ups of c. one minute at five to fifteen meters intervals, without camera stand or zoom, with automatic light adjustment, downstream, even if the waterfalls of course looked more magnificent upstream from below. I thought I would document a few moments on their path, to learn how to see, to take pictures, to be patient. I wanted to be ascetic and get for one moment away from my own preferences, stories, intensity and fiction. I hoped the work would be a humble tribute to the multiplicity of nature and at the same time an exercise in (towards) exactness. Later I noticed, that what I thought was exact was nothing of the sort, but rather sloppy after all. I also understood that exactness, exactitude, is basically absurd as an aim. Nothing in water is exact.

That was almost fifteen years ago. Now in June 2014, one day in Kilpisjärvi, I came by a beautiful waterfall near the village, and was hypnotised by the force of the water again. Today video technology is much improved.The still images show a moment of the movement which is not discernible with human eyes, the splashing is frozen into an image which changes every second. The images with only water are the most abstract but also the most interesting ones. There is no grass, no shore, no fixed landmark to hold on to: 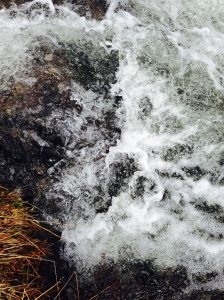 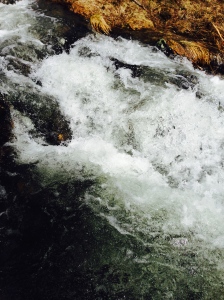 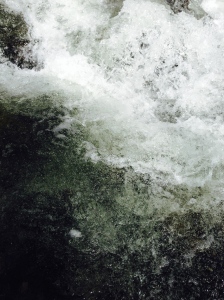 On Wood!
Weaving patterns…
Ah, the cakes in Stockholm …
End of party time…